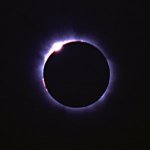 This is a brief report on the total solar eclipse that occurred on August 11th 1999 as observed from Siofok, Lake Balaton, Hungary.

I had originally planned to view the eclipse from southern Germany but changed to the the Lake Balaton area after seeing the weather predictions in the NASA Eclipse Bulletin by Fred Espenak. The path of totality crossed Hungary some 60 miles South of Budapest Figure 1 (99K). I flew out to Budapest the weekend before the eclipse with my colleague Mike Foulkes and drove down to Siofok Figure 2 (96K) which was on the eclipse centreline.

The weather for the few days before the eclipse was perfect, with clear blue skies and temperatures in the mid 30's centigrade. However, on the Tuesday evening a cold front approached from the NW and Wednesday dawned cloudy and wet. Fortunately the front quickly passed and by 8am the Sun was out again with just a few small banks of thin cirrus occasionally passing across the sun. We had planned to set up our equipment on the lakeshore but a quick recce at 9am reveal thousands of people already taking up positions so instead we used a small grassed area at the back of the hotel adjacent to the railway station and a small local bar! Figure 3 (58K).

The equipment Mike and I used can be seen in Figure 4 (83K). My setup, on the left, comprised a Canon EX-1 camcorder fitted with a 600mm mirror lens and a TeleVue Pronto 70mm refractor plus x2 Big Barlow and x4 Powermate to give a solar image 42mm in diameter. These were fitted to a small German equatorial mount driven by a 12V D.C. synchronous motor running off eight AA batteries. Mike also used a Pronto, fitted with x2 Big Barlow and an extension tube to give a solar image about 16mm diameter. He also had cameras fitted with 135mm lens plus x2 converter and 50mm lenses for wide angle views, all fitted on another German equatorial mount.

The eclipse started at 1126am local time with the sky still relatively clear. Half an hour before 2nd contact another bank of thin cloud started passing across the sun and was just clearing at 3rd contact (1251pm). It was thin enough to see and photograph Baily's Beads, the chromosphere, prominences and inner corona but interfered with the outer corona. The light was noticeably diminished some 30 mins before totality and it was so dark during totality that Mike needed to use a small torch to see the aperture rings on his cameras.

Mike photographed the partial phases as well as totality Figure 5 (121K) but I just concentrated on totality and in fact spent most of the time between 1st and 2nd contact in the bar across the road. As it turned out I got lots of pictures of the 30 seconds leading up to second contact Figure 6 (50K). I also took at lot shots of the chromosphere and prominences Figure 7 (23K). Unfortunately I got a bit carried away and ran out of film just before 3rd contact. Better luck next time.

(Thanks for the superb images and article, -Ed)